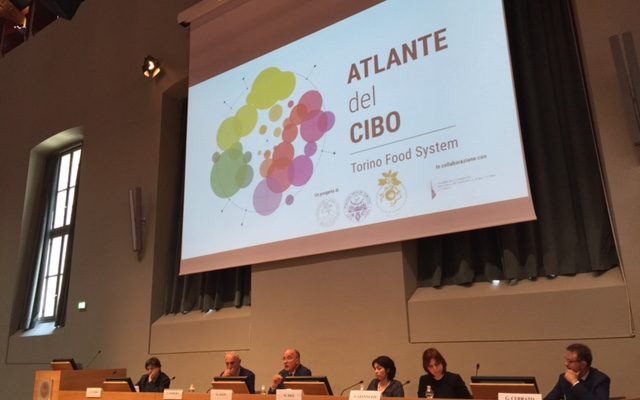 Quotidiano Piemontese – Yesterday, Monday 29th May, at 11 a.m., in the Aula Magna della Cavallerizza Reale (Via Verdi 8, Turin), the Atlante del Cibo di Torino Metropolitana (Atlas of Food of Turin) was presented. This is a project promoted by the University of Turin, the Polytechnic and the University of Gastronomic Sciences in cooperation with the Chamber of Commerce of Turin, and it is a one-of-a-kind cross-disciplinary research because it collects a catalogue of representations, graphic pieces of information, videos, texts, researches and articles which are available to the public and useful for an analysis and a representation of the “food system” of Turin and of the Province of Turin.

The aim of this project is to give people information about the food system of Turin, collecting and arranging the existing pieces of information and to offer a vision of growth that confirms the potential of the area.

To this purpose, it is necessary to identify and to define the players, the resources, the flows of matter, energy and knowledge, the areas and the relationships that make up this system we know little about. As the coordinator of the project, Professor Egidio Dansero of the University of Turin, highlights quoting the renowned Italian economist Luigi Einaudi, “we must know in order to decide”. We can therefore start from food to reinterpret a series of big or small, institutional or not policies, actions and projects in the area of Turin that can contribute to defining the future of local policies.

Therefore, the five-year research that aspires to become a replicate in other contexts, aims to give a response to the need of knowing more (that not only is in the local areas, but also in the international areas) and of having players, subtended by the will of supporting the planning of food policies of Turin and of improving the day-to-day management of the production and distribution system.

The Atlas is an instrument of narration, analysis and monitoring, through mapping processes and functions that enable the connection of existing pieces of information with the possibility of carrying out thematic, geographical and cultural detailed studies, in order to reflect on the food regional system. The Atlas also aims to increasing the awareness among citizens and decision-makers, creating new opportunities for dialogue, discussions and for the sharing of the objectives for a widespread well-being.

In the morning the First Report on the situation of the food system of Turin was presented. This is a document that will become a real observatory for the regional dynamics related to the food in Turin, with periodic reports and thematic detailed studies.

The first issue of the Report contains reflections on different topics that are in 37 specific sheets (accompanied by maps and graphic pieces of information), from agricultural products to breeding, from school canteens to the typical products and the food and wine top quality products, whose aim is to describe and explain the most significant elements of the current situation of the food system of Turin on variable scale, from district level to regional level.

Professor Franco Fassio of the University of Gastronomic Sciences and National Councillor for Slow Food Italia says that: “The database of knowledge that makes up the Atlas presents us a situation full of pieces of information about the flows and the dynamics of the local food system, a vision of the whole system instead of the analysis of the single components that can lead us to the planning of valuable relationships that are an example of the quality of the system”.

In addition, a website section gives the opportunity to have access to a shared mapping process that uses the civic social network called “First Life”, that has been developed by the Department of Computer Science of the University of Turin.

The Atlas provides a first series of pieces of information that are verified, transparent and updated, that can be useful to the design of new products and services and, more generally, to the activation of a cultural innovation project in the region: an area where new ideas and business models oriented to a sustainability of the system can develop, highlights Professor Paolo Tamborrini of the Department of Design of the Polytechnic of Turin.

In the metropolitan area of Turin (with about 1.5 million people living in the restricted metropolitan area), about 1,600 tons of food are consumed every year, of which 600 tons of fruit and vegetables, 400 tons of cereals and cereal-based products, 300 tons of dairy products, 200 tons of meat and 65 tons of fish. Despite a growing demand for organic products, in particular in reference to the demand from school canteens with 8 million meals every year, the percentage of agricultural surface devoted to organic food currently stands at 1,839.31 ha, that account for 0.88% of the total utilised agricultural area (UAA). The distribution of organic food is heterogeneous: in rice production, the organic food production model accounts for 23.6% of the UAA, while in other productions, for example the cereal production, it is limited to 0.5%. However, it is interesting to notice that the current area under conversion, 1,591 ha, is almost the same as the total of the area under cultivation of existing organic methods.

Another particularly significant piece of information is the role of the peri-urban agriculture and of the surrounding zones of the metropolitan area in the alternative sales channels to the large-scale organised distribution which are based on direct sale (farmers’ markets, ethical purchasing groups market, etc.).

In fact, the companies of the metropolitan area that sell directly their products are 36% of the total. This percentage is definitely higher that the regional figure (12%), which reaches 58% if we only consider the companies situated in the Municipality of Turin (figures from the 2010 Agricultural Census).

As regards distribution, the food system of Turin is characterised by the presence of both the traditional channels of the industrialised conventional system (GDA-Grande Distribuzione Organizzata – Large-scale organised distribution, and wholesale markets) and by a number of food markets (about 42 every day), which are also characterised by the direct sell by producers, which is unparalleled in Italy, in relation to the population.

Every day there are more than 40 municipal markets in Turin, where in most of them there are farmers’ stands (more than 300 every day), largely from areas within 50-70 km of the city, who directly sell their products.

In addition, in the Municipality of Turin alone, there are about 70 GAS (Gruppi di Acquisto Solidale – Ethical Purchasing Groups) and 15 farmers’ markets, as well as a dozen of small shops specialized in the sale of the products of the short distribution chain.

On the other side of the food system of Turin there is waste: it is estimated that every Turinese produces 110 kilos of organic waste every year (of which 50% enters the system of separate collection) that come from food consumption, to which we must add packaging waste (figures from the Province of Turin, 2012).

In Turin and in Piedmont food plays a very important and historical role: in fact, the food and wine sector, together with the top quality restaurant industry are a thriving factor of the city, especially in terms of promotion of the territory and tourist development. Just think about the top quality products such as wine, chocolate and baked goods, the big markets such as the Porta Palazzo Market, and the respective responsibilities and knowledge that make up a significant tangible and intangible capital.

The self-recognition process of these instruments can contribute to the definition of the characteristics of the food system of Turin, to the development of its urban and rural components, to the identification of promoting ad hoc routes, to the activation of processes of international visibility if we think about food and, at the same time, cultural events such as Terra Madre Salone del Gusto.

In fact, food is one of the strategic resources on which the role of the post-industrial Turin is redefining, both towards the inside of the city and in the international urban networks, both from a tangible point of view (economic activities, urban transformations, flows, etc.) and in terms of a symbolic and building aspect of a new image of the city.