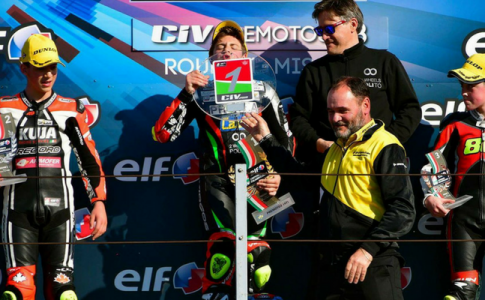 An extraordinary weekend for the two-wheel team of Politecnico of Turin, 2WheelsPoliTO, has just finished. Thanks to the Italian Motorcycle Federation’s support, the team takes part to the most important Italian speed championship on track, in the Premoto3 class, with two motorbikes with a cylinder capacity of 250 cc and a four-stroke engine.

The season has begun last weekend with the races in Misano Adriatico on the Grand Prix motorcycle track “Marco Simoncelli”, where the young racers of the team, Alberto Surra from Turin and Nikolas Marfur from Rome, competed with roughly thirty peers.

On Friday, Alberto obtained a sensational pole-position, establishing the new record of the track, while Nikolas reached the fifth place of the starting grid. In the first of the two races, the turinese recer arrived first, confirming his result in the second race, where he placed himself at the top of the board, with more than 20 points ahead his rivals. While fighting for the first places during the first race, Nikolas slided down his motorbike, luckily without injuring himself, and obtained the eight place in the second race.

The placement is the result of the hard work during the winter period, when team members, unhappy with the result of the last year (second in the final of the championship), continued the development of their prototype.

It’s an historical brace for a university team in a semi-professional competition like the Italian Speed Championship, a result which has been achieved also thankds to the enthusiasm and the willingness to improve of those who participate to the project, working at it or supporting it.

The result is even more important if we consider the first place in the classification “Costruttori”, in front of important companies in the motorcycle sector, both Italian and international.

Next date: beginng of May on the international track of Mugello, where the 2WheelsPoliTO and its racer will have to defend their first place.