News from ESCP Europe: Bachelor’s degree between China and Europe 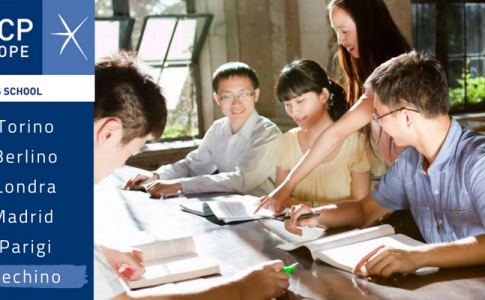 During the three-year course students are required to change campuses once a year, in order to know the reality and the culture of three different countries. Each student will choose a different campus each year, during three years:

Three years after its launch on an international university level, the Bachelor in Management (BSc) – Bachelor’s degree programme of the ESCP Europe business school – widens its horizon thanks to the partnership with Tsinghua University of Beijing, one of the best universities in the world.

The three-year course will be held in three different countries: other than in Berlin, London, Madrid, Paris and Turin, young aspiring managers will have the opportunity to study at the new academic partner, in China. Students may choose to begin in September 2018 at Tsinghua University and study for the following years in the other European branches of the business school. Courses will be the same as for first-year students in ESCP EurOpe campuses, but contextualised to the Asian market.

The Bachelor in Management is an exciting, original and engaging programme which combines different subjects: the classics of management, such as marketing and finances, with humanities, among which psychology and sociology, language and self-development courses. Moreover, it includes internships and social projects, allowing students to acquire complete multidisciplinary knowledge. The goal is to create a bridge between university and the job market, preparing students for an international career in the current extremely diverse economic sector, encouraging them to trace a new world map.

First-year lessons, including in China, are held in English, as are the lessons of the second year in Turin. While it is possible to choose between English and the local language in the following years in the campuses of London, Madrid, Paris and Berlin. The partnership will also allow students from Asia to obtain an European Bachelor in Management (BSc).

“As an European business school, we have chosen to develop a programme between China and Europe which is perfectly aligned with our international strategy and with our goal of training future leaders – explains Léon Laulusa, Executive Vice-President e Dean for academic affairs and international relations of ESCP Europe – “Even though it is the world’s second economic power, China isn’t well-known in the Western world. Not everyone knows, for example, that in 2017 among the 500 biggest companies in the world in terms of turnover, there were 109 Chinese companies. Or that the 40 biggest Chinese companies yield over 17 trillion euros, exceeding the GDP of the whole European Union”.

“Chinese economy is still unexplored and offers thousands of opportunities, so it must be analysed closely – explains Prof. Francesco Rattalino, Director of ESCP Europe Turin Campus -. This Bachelor’s degree course meets the needs of young people who want to obtain a qualification as fast as possible, in order to have the best tools to face the job market in the most efficient and competitive way. ESCP Europe wanted to accelerate the development of the programme, answering the growing demand of studying in China made by students with a strong international inclination. Tsinghua University e ESCP Europe aim to the same level of excellence, welcoming students from the best high schools”.

“One of the greatest advantages of this study programme in China is the possibility of interaction for students from all over the world – maintains Margot Drancourt De Lasteyrie, Director of China Projects in the International Affairs Department di ESCP Europe -. Twenty years ago, I had the privilege of studying in Shanghai, but at that time international and Chinese students didn’t have the chance to attend lessons together. What better way to know a country that having local friends? The possibility of studying in China for a year further improves the internationalization of students and the international opportunities for their career”.

Since its launch, the Bachelor in Management has attracted considerable interest internationally: 286 students are currently enrolled, coming from 54 countries, 5% of them from China.

Applications for next year are still open. The deadline id July 10, 2018.

What is ESCP Europe?

Established in Paris in 1819 as the world’s first Business School, ESCP Europe is one of the most renowned schools internationally and always comes first in rankings of Business Schools. It has 6 campuses in Europe – Berlin, London, Madrid, Paris, Turin and Warsaw – and trains students to an international career in management. In Europe, about 4.600 students and 5.000 managers, coming from 100 different countries, enrol every year. ESCP Europe offers complete programmes of General Management and Masters. The alumni community has 50,000 members of 200 different nationalities, and is active in 150 countries. Its Turin branch is open since 2004, thanks to the support of the Chambre de Commerce et d’Industrie de Paris, the Camera di Commercio di Torino, the University of Turin, the Politecnico di Torino and many partner companies.

Currently, there are 400 Chinese students in ESCP Europe, 600 are expected in the years to come. While in the past years there were:

250 to 300 students from ESCP Europe go to China every year to study (semesters during Master’s degree or Double-degree programmes) or for internships.