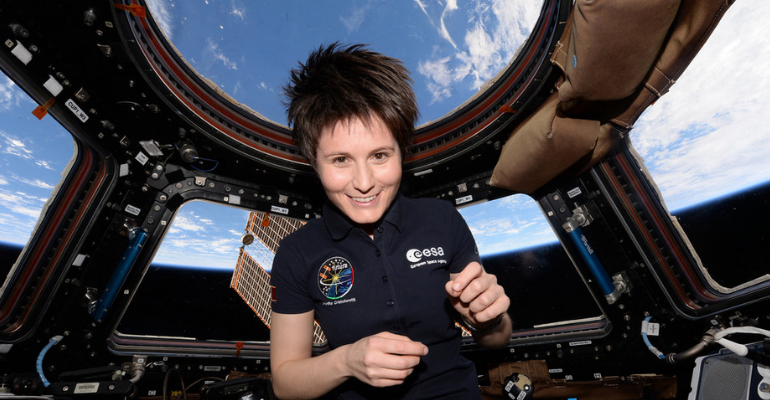 The astronaut Samantha Cristoforetti, protagonist of the missione Futura of the Italian Space Agency, on the occasion of the publication of her new book “Diario di un’apprendista astronauta”, will present her professional and human experience, the long journey that took her to the International Space Station.
The proceeds will be entirely given to UNICEF Italia by the author.

“When the racket engines were started up, I fulfilled the biggest dream of my life.” For almost 7 months Samantha Cristoforetti has been into orbit around the Earth on the International Space Station. In her book “Diario di un’apprendista astronauta” (Diary of an apprentice astronaut), she tells the busy life on board, with the amazed eyes of who becomes, day after day, a space human being: from science to repairing the toilet, from the arrival of cargo spacecrafts to walks in the space with the colleagues, from alarms to routine, from big events to little discoveries, from  rites to cutting hair. The journey which took her up there was long. Years of absolute dedication from her childhood dream, years spent with suitcases in the hand through three continents, through occasional meetings and  strongly wanted encounters, through languages and cultures, nature and technology, efforts and long waits, joys and sorrows: all in order to learn how to become an astronaut. Samantha Cristoforetti will tell the story of the long journey, which took her to the launching pad and the days she spent on board the Space Station.

Samantha Cristoforetti was born in Milan in 1977 and she grew up in Malé (Trento). She got the master’s degree in Mechanical and Aerospsace Engineering  at the Technical University of Munich, after an Erasmus in Toulouse and an year in Moscow, for the research thesis. From 2001 she attended the Accademia Areonautica (the Italian Air Force Academy), getting a degree in aeronautical science. She got the licence of military pilot in the US and then she was allocated in the 51° Storno di Istrana, on a AM-X aircraft. She is officer of the Areonautica Militare, with the rank of captain. In 2009 she entered the Astronaut Corps of the European Space Agency and in 2012 she was detailed to the Expedition 42/43 on the International Space Station, a long-term mission at the disposal of the Italian Space Agency. The launching of the spacecraft Soyuz took place on 23rd November 2014 from the cosmodrome Baikonur, in Kazakhstan. Samantha spent 200 days in space, sharing her experience trough her logbook and on Twitter (@Astrosamantha).

Reserved seats in the Aula Magna are sold out, but you can follow the event in the adjacent rooms (Aula 3, Aula 5) and in streaming on Facebook.

For organizational matters, it is compulsory to give a credit by 12.00 am of 26th October to relazioni.media@polito.it

Invitation to the initiative