The Master in Management of ESCP Europe ranks first in Italy 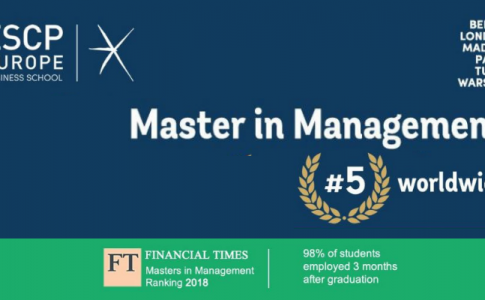 The master in management of the Business School ESCP Europe is on top of the Financial Time ranking and it is once again first in Italy.

The program, which ranks 5th globally, stands out for the international character of the study experience, quick employment, gender equality and goals reached in terms of employment and average salary.

The Master in Management of the international Business School ESCP Europe is also in 2018 the best course of study in Italy and it ranks fifth globally, according to the annual Financial Times ranking. The ranking takes into account the management training before employment. See here the whole ranking.

With its six campuses in Berlin, London, Madrid, Paris, Turin and Warsaw, the school consolidates its position at the top of the ranking, which is the international baseline parameter for the choice of enrolment in the masters of the 100 more important business schools in Europe, Asia and Australia, which have been classified following 23 criteria, divided into four big areas.

The MIM of ESCP Europe stands out for the international character of the study experience, quick employment, gender equality and goals reached in terms of employment and average salary, equal to 69.865 euros (81.282 dollars), ranking higher than the Bocconi University (2nd in Italy, 6th in the world), the LUISS Guido Carli (3rd in Italy, 89th in the world) and the School of Management of the Politecnico di Milano (4th in Italy, 95th in the world). 98% of students who attended the master find employment within only three months from graduation. The ranking considers the multiculturalism of the school and the program, the quality of teachers, the salary of the students who have already graduated and the career development within three years from getting the Master’s degree.

In addition the MIM of ESCP Europe in among the best worldwide as regards the point “international course experience”, how much is the Master exposed internationally and it is given by: student composition (86% international students) and teachers (78%), the structure of education, the range of post-program job opportunities for the students.

“ESCP Europe’s mission is to inspire and educate the leaders of tomorrow and the results of the ranking prove that we are achieving what we wanted. Year after year we move up the table of the Financial Times, being first in Italy for the programs of international degree – said Francesco Rattalino, director of ESCP Europe Torino Campus-. One of our strengths is the international character of teachers, students, but also of the companies we work with, where the students will work.”

Having studied abroad is one of the reasons of the success of graduates of ESCP Europe in employment and their satisfaction about the program.

“This ranking shows how one of the fundamental values of ESCP Europe is “diversity”, both cultural and in gender – said Francesco Profumo, president of ESCP Europe Torino Campus- . in the current society too little women fulfill leadership roles and one of our goals is to educate manager women, who will close the gender gap. In the Master in Management we even saw an overtaking. In fact, of the 892 students, a good 52% are women. This is an important signal of change, which will bring positive effect in the business world in a near future.”

“We are happy of this position: it reflects our commitment in educating the next international managers – adds Frank Bournois, Dean of ESCP Europe-. Timing couldn’t be better to celebrate our 200° anniversary. In fact, from January 2019, in all the campuses ESCP Europe many events will take place and they will involve the wide international community of the school.”

“ESCP Europe goes on ranking in the first positions thanks to assessment criteria that are crucial in our global strategy – concludes Léon Laulusa, Dean for Academic and International Affairs di ESCP Europe –. “this international recognition strengthens the development policy created by the school in order to educate a new generation of international leaders throughout the combination of innovative pedagogy, cross-campus educational programs and teachers who are extremely active in the research”.

Program of the master

After a strict selection similar to the one of the Grandes Ecoles, students attending the 2nd year of economics and all graduates awarded any first academic degree who want to start an international career in management are admitted to this international Master’s degree, which provides up to four European economics advanced degrees. Students of the MIM finish ESCP Europe in 2 or 3 years, choosing between two or more countries, in six campuses of the Business School, according to their language skills and the jobs they would  like to get.

ESCP Europe provides high quality education and multicultural classes, in which there are students from all over the world, in particular from Italy, France, Germany, Spain, but also Australia, China, Luxembourg, Morocco, Switzerland and USA, with a different study background.

In the academic year 2018-2019, the MIM class in Turin will be composed of 155 students. Of these 54% have studied Economics, 32% Engineering, 4% attended the Pre Master in the ESCP Europe Paris Campus, 2% studied Political Science, 1% Mathematics, 1% Foreign Languages and Literature, 1% Public Relations, 1% Philosophy, 1% History, 1% Conservation of Cultural Heritage, 1% Arts Management, 1% attended the Ecole Superiore Electricité.

The FT ranking examines the MIM class which started in the academic year 2012-2013 and ended in 2015. In the statistics are included the evaluations of Italian students who started the master in Turin. Data show that job opportunities are very promising, with a peak of interest in the fields of finance and counseling (48% of the total) and students find a job in a very short time. With respect to a rate of 100% of employment in firms as interns, 98% got permanent employment by three months from the end of the course.

Career Office data of employment sectors of the Master class

“I have worked for 3 years in the M&A team in investment banks, I manage exceptional financial operations such as corporate mergers and  takeovers, exchange quotations and other kinds of funding. ESCP Europe allowed me to start my career in a very practical way: it is a great bridge between the desk in school and the one in the office. Companies appreciate dynamism and adaptability of the ESCP Europe students and their constant will to face challenges and excel.”

“I think there aren’t many people in Italy who finish university having done at least 3 apprenticeships and who know 3 different languages. Of course this is a great business card for a student who is seeking employment for the first time. I have chosen to live in Paris, according to the kind of job I have and the lifestyle here, which I think is well-balanced between the Mediterranean culture and the international atmosphere. I’m interested in investments and markets and here there are many small and medium companies, where competent and successful people work. It is a great environment where to learn the job and grow.”

Columbia Business School candidate, sponsored by McKinsey, where she has worked for two years, as Associate, in London

“The opportunity of living in three different countries and work at the same time was exciting and it allowed me develop managing competences in an international framework. Now I am a management consultant and my job is to help my clients in solving difficult problems, such as implementing profitability of the company, rearrange it optimally and be successful in a new market.”

ESCP Europe was opened in Paris in 1819. It was the first Business School in the world and nowadays it is one of the most renowned internationally and constantly very high in the ranking of Business Schools.

With six campuses in Europe – in Berlin, London, Madrid, Paris, Turin and Warsaw –, it prepares students for an international career in management. On the European level, it welcomes every year about 4600 students and 5000 managers, from 100 different countries, with complete programs in General management and Master’s degrees. Ex students are 50 000 of 200 different nationalities and it is active in 150 countries. From 2004 the master is available in Turin, thanks to the support of the Chambre de Commerce et d’Industrie de Paris, the Camera di Commercio di Torino, the Università degli Studi di Torino, the Politecnico di Torino and many partners companies. The educational offer – credited by EQUIS, AACSB and AMBA – includes: international Bachelor’s degree, Master training before employment, MBA in International management, Master’s degrees, Executive programs for companies and Executive MBA.