Home/Events/Lecture with Indira Lakshmanan: "Journalism as a Public Service" – 2 April 2019

Lecture with Indira Lakshmanan: "Journalism as a Public Service" – 2 April 2019 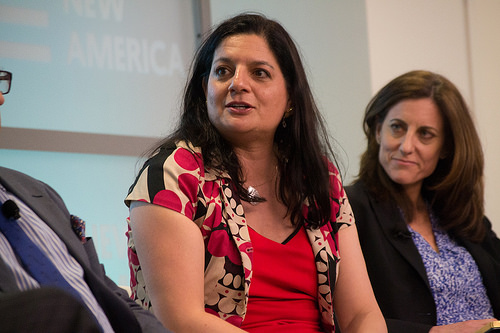 On April 2, from 10 a.m. to 1 p.m., Quazza Auditorium will host a lecture given by Indira Lakshmanan,Executive Editor on Crisis Reporting at Pulitzer Center in Washington and columnist for The Boston Globe. Over the course of the career as a journalist, she has written about election campaigns, revolutions and coups d’état, between the US and foreign countries, for The Globe, Bloomberg, The New York Times -International Edition, NPR, PBS and POLITICO Magazine. She spent seven years travelling with State Secretaries Hillary Clinton and John Kerry, and she interviewed famous political leaders, including Benazir Bhutto, Fidel Castro and Hugo Chavez. She embedded with sea pirates in the Philippines, Maoist rebels in Nepal, and Khmer Rouge holdouts in Cambodia. Her investigative reports exposed child labor in Bolivia illegal logging in Brazil, corruption in China and incarceration of  innocent children in Nepal. Indira graduated from Harvard University and did graduate studies at Oxford University. She is currently in Italy, working as a reporter from the International Journalism Festival in Perugia.
The lecture will be moderated by Anna Masera, journalist, executive director of the laboratories and newspapers for Master’s degree, and public editor at La Stampa.
Alberto Sinigaglia, president of the Association of Journalists of Piedmont, and Cristopher Cepernich, scientific director of this Master’s rogram and sociologist / expert in media and political communication at UniTo are expected to exchange formal greetings with the audience.
The lecture will be in English. No simultaneous translation is scheduled. Please confirm your participation by 22 March 2019 by filling in the form available at this link: confirm registration .
The lecture will be recorded and it is accredited as a refresher course for journalists.