Home/News/FROM THE SHELL ECO-MARATHON PODIUM: 10 YEARS OF RACES AND PASSION FOR H2POLITO TEAM

FROM THE SHELL ECO-MARATHON PODIUM: 10 YEARS OF RACES AND PASSION FOR H2POLITO TEAM 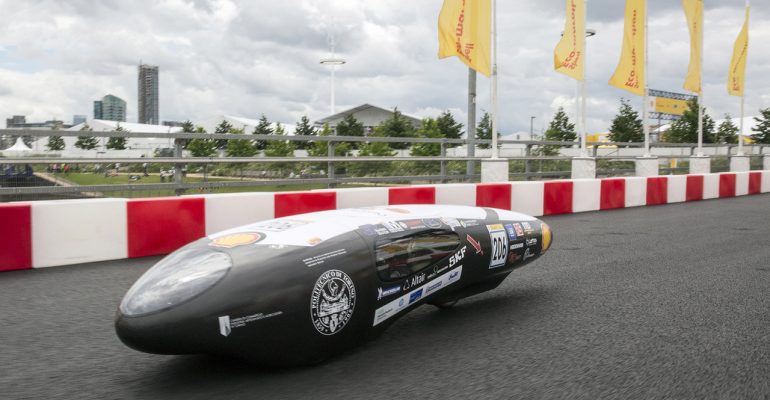 The student H2politO Team of the Polytechnic of Turin celebrates its first 10 years with a presentation of its prototypes and of the students who, over the past years, have obtained excellent results in international competitions.

In these races, high-energy efficiency futuristic vehicles that are designed by the students of high schools and Universities of the whole of Europe don’t compete on speed but on the ability of designing prototypes able to travel as much as possible on the equivalent of a litre of fuel or a kWh or a m3 of energy.

The second prototype designed by the H2politO Team, called XAM, ranked 10th out of the 26 internal-combustion vehicles that took part in the competition and belonged to the Urban Concept class, and it ranked 4th out of 7 in the ethanol vehicles class, with a consumption of 110 km/L in the race that took place in London.

In addition, in the Shell Eco-marathon of London, H2politO Team also won the Communication Award, the special award given to the Team that is best able to communicate the features of their projects both on social networks and to traditional media, and that is also able to promote the competition thanks to the collaboration with companies and the participation of students and young people. That’s not news to the Team, since it has already won this award 4 times: in 2009, 2010, 2012 and 2014.

Over the past 10 years, the Team has won many awards and has achieved many goals with a lot of passion. All this has been mentioned by the Team’s Faculty Advisor, Massimiliana Carello, together with the students, who have shown all the vehicles they have designed over the past 10 years: IDRA08, IDRA09, IDRApegasus, XAM 2.0, IDRAkronos and XAM.

“10 years ago, when I created H2politO Team, I would have never imagined that I would get this far and that I would make H2politO Team become a “top Team”. The results we have achieved this year are the product of hard work and a lot of time, of people who “teamed” when facing problems and finding solutions, without giving up. Maybe this is exactly what made us achieve excellent results both in London and in Le Mans”, says Professor Massimiliana Carello, the Team’s Faculty Advisor.

On this occasion, Michelin Italia assigned 10 scholarships to the students who distinguished themselves in the design and creation of the vehicles that took part in the competition, in order to support all the activities of H2politO Team.

Michelin is the technical sponsor and the only tyre supplier of the Shell Eco-marathon, and also IDRAkronos is fitted with Michelin tyres that provide a rolling resistance six times lower than the MICHELIN Energy Saver road tyre.

Simone Miatton, Michelin Italia Personnel Director, said: “We have been following H2politO Team for five years with great passion. It has achieved many important goals, that lead them to the winner’s podium in the Shell Eco-marathon of Le Mans thanks to the IDRAkronos vehicle, a prototype fitted with Michelin’s low rolling resistance tyres. It’s the spirit of innovation that unites us with H2politO Team and with its amazing low energy consumption vehicles. From our first “green” tyre launched in 1992, Michelin’s commitment in the field of continuous innovation is at the service of a safer, efficient and sustainable mobility. This year, H2politO Team’s 10th anniversary provides us an even happier opportunity to celebrate together our common vision on the mobility of the future”.